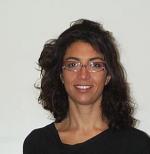 PhD in Mathematics and Scientific Calculus, University of Pavia, 2003.

Construction of Wavelet basis on the interval.

* Coupling of Wavelets and Finite Elements.