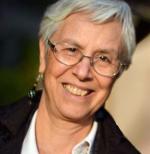 Member of the Swiss Accreditation Council

Head of the Mathematical Sciences Department (2012)

Member of the teaching staff of the Ph.D. in Mathematics for Engineering Sciences