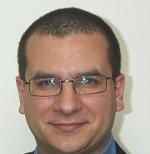 Born in Catania (Italy) on September 13, 1977, since December 2011 I have been conducting didactic and research activity, first as Assistant Professor and then as Associate Professor (L.24/2010), at the Department of Mathematical Sciences (DISMA) "G. L. Lagrange" of the Politecnico di Torino in the group of Mathematical Physics.

My principal research interests are theoretical and computational mechanics, with particular attention for the mechanics of continua and of porous and multiphasic materials, which I approach within a differential geometric framework. Within this context, I mainly dedicate my research to the biomechanics of growth and remodeling of biological tissues, by elaborating models originally conceived in Elastoplasticity, of both "classical" and "strain-gradient" type. Recently, my interests have included also the Theory of Asymptotic Homogenization for the constitutive characterization of materials, among which the electroactive ones, and Fractional Calculus for the study of the constitutive response of highly heterogeneous materials.

In the following, I report the most relevant steps of my educational and professional career:

Laurea (equivalent to MSc+BSc) in “Mechanical Engineering” (five-year study plan) received from the University of Catania, Italy, on October 21, 2002.

From October 1, 2008 to December 15, 2011: Post-doctoral fellow at the “Goethe” University of Frankfurt, Frankfurt am Main, Germany. Supervisor: Prof. Gabriel Wittum.

From December 16, 2011 to September 30, 2014: Assistant Professor of Mathematical Physics at the Department of Mathematical Sciences (DISMA) “G. L. Lagrange” of the Politecnico di Torino, Italy.

From October 1, 2014 to date: Associate Professor (L.240/2010) of Mathematical Physics at the Department of Mathematical Sciences (DISMA) “G. L. Lagrange” of the Politecnico di Torino, Italy.